Today we cycled a short roughly 46 km from Esztergom to Vác. We had planned to stay another day in Esztergom but our hotel last night wasn’t great so we decided to cycle half way and see Vác and then continue to Budapest, our endpoint tomorrow! We really have been taking it easy this week. I won’t bother putting in a map today as we’re nearly there.

Over the trip I’m not sure exactly how many hotels/guesthouses we have stayed in. Some were outstanding and I’d highly recommend, some were perfectly fine, thankfully only two were bad, last night being one of those two, (the other being very early on in the trip).

With all the places that we have stayed there’s been an awful lot of packing plus checking that we left nothing behind. It helps that we have so little with us.

The timing of our trip was good, (not an accident), in that up to now it was easy to book accommodation, availability was good. Last night we just had to take what was available. It was great to do the trip when tourists were fewer, from now on with school holidays in most countries, that won’t be the case.

With only a short cycle today, we had plenty of time to see Esztergom. To give an idea of its size, it has a population of 28,500. Esztergom is the seat of the Roman Catholic church in Hungary. According to Wikipedia, in a 2011 census, the Roman Catholic religion was the biggest (37.1%) of those declaring religious belief in Hungary, (almost half were non-religious, atheists or undeclared.)

We first cycled across Mária Valéria Bridge, connecting Esztergom with the Slovakian city of Štúrovo. The bridge was destroyed during WWII and only reopened in 2002. I took this photograph of the bridge from the Basilica on Castle Hill, our next stop. We’re looking across the bridge from the Hungarian side to Slovakia. A sign on the bridge said that its rebuilding was supported by EU funds as well as by the two governments.

Then it was on to the Basilica. The Basilica is the largest church in Hungary and is situated on Castle Hill, we could see its dome long before we ever reached Esztergom when cycling yesterday.

The building of this present church began in 1822 on the site of its 12th-century counterpart, which was destroyed by the Turks. The Basilica was consecrated in 1856 with a sung Mass composed by Liszt, the Hungarian composer.

The inscription reads Caput, Mater et Magistra Ecclesiarum Hungariae, meaning The Head, The Mother and The Teacher of the Church of Hungary. I was pleased to see Mother getting the mention in a patriarchal church! 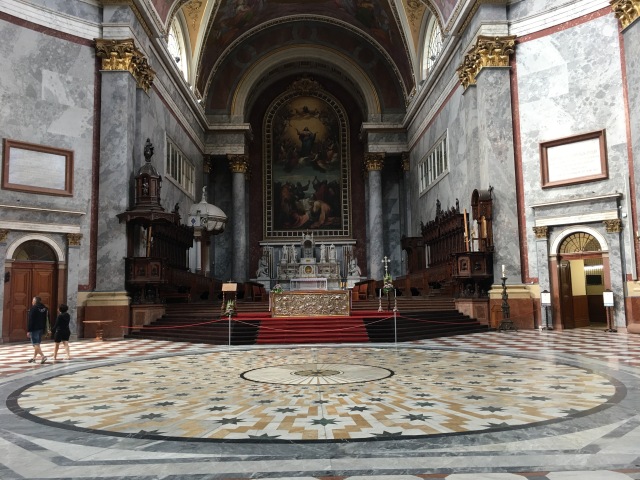 The green in the dome is only some netting

A close-up of the beautiful altar detail 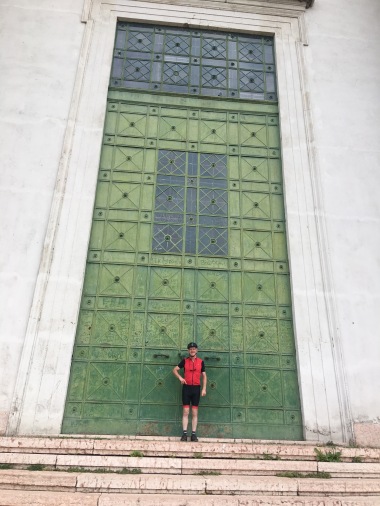 To give you an idea of scale, Denis dwarfed by its back door. (Interesting to see weeds allowed to grow here!)

We spent a while looking for Esztergom’s Plague Column erected by the town as its way of giving thanks when a plague epidemic passed it by. We’ve seen plague monuments in different cities/towns. We bumped into a French couple, whom we had met before while cycling. As well as the Basilica, they enquired what they should see in Esztergom. We told we were looking for the Plague monument. She replied that she wasn’t interested in plague columns as they’re common. Denis mentioned – not to us as being an island nation, the plague never reached us. We looked but couldn’t find Esztergom’s Plague Column.

We set off on what seemed like a holiday, (it being so short), cycle to Vác. The Gods must have felt sorry for us because the Véloroute from Esztergom to Vác started as a lovely cycle path. Yesterday was too fresh in my mind for me not to take time to really appreciate it. And then it was gone again. We were left with sharing the road for a couple of kilometres.

With apologies to our dear Hungarian friends, we have found Hungarian drivers to be by far the worst to share the road with while cycling on this trip. Countries up to now have really accommodated cyclists. Hungarians behave as if cyclists don’t exist. They drive very fast, they overtake (in both directions) on narrow roads at the exact point where cyclists are on the road i.e. they don’t wait until they have passed the cyclists. I’ve watched them overtaking coming into blind corners and feared they would come to grief. But before you think I’m wasting energy worrying about them, I’m not. I’m keeping my energy for self-preservation.

Yesterday we had few sightings of the Danube, today we were very close to it.

We passed the small castle town of Visegrád.

This town was made famous by the term – the Visegrád Group, a cultural and political grouping of the four Central European states – the Czeck Republic, Hungary, Poland and Slovakia for the purposes of furthering their integration within Europe and working closer together with each other. (The group used to be occasionally referred to as the Visegrád Triangle, due to the fact that it was originally an alliance of the three states before the dissolution of Czechoslovakia into the Czeck Republic and Slovakia.) Visegrád is only a very small place  – it only has a population of 2,000 people. Mind you it is at such a height that it appears very imposing! Interestingly both the name of the group and where they actually met, follows on from a meeting of the rulers of those same counties – Bohemian (Czeck), Polish and Hungarian in Visegrád in 1335.

We had commented though there are no snakes in Ireland, we hadn’t seen any on this trip and then we passed this (dead) fellow along the road. 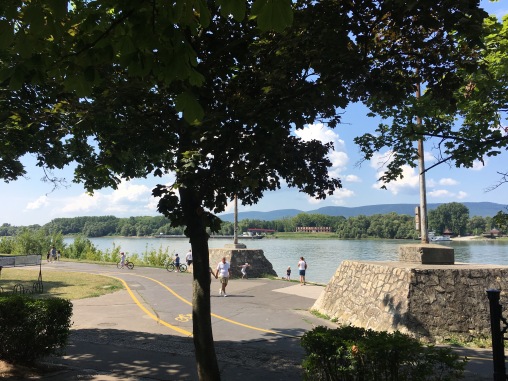 Vác, slightly bigger than Esztergom, is on the Danube just below where the river changes course and flows south. Whilst the change in direction looks significant on the map, in reality cycling along beside it, we didn’t really notice it. 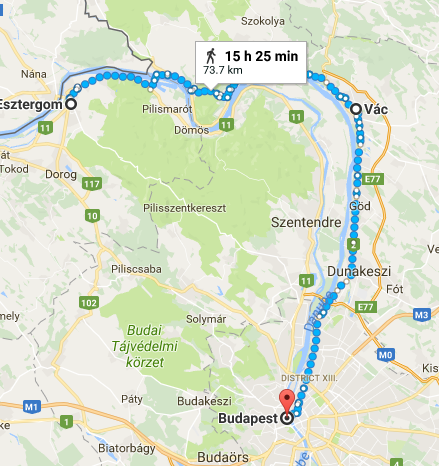 We didn’t bother going to see the cathedral in Vác, but we did go to see its beautiful baroque city centre. 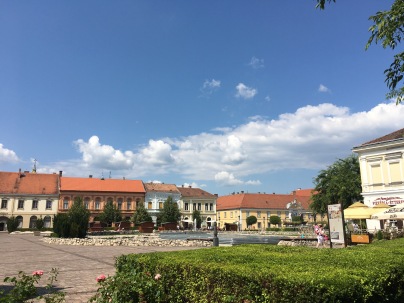 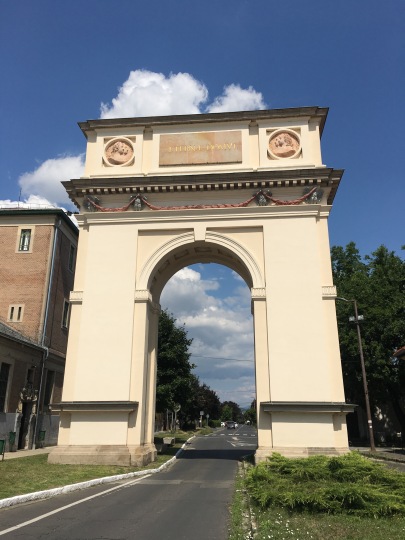 And its 18th-century arch of triumph. I don’t have a 100% reliable source for this story but it goes that in 1764, the Vác patriarchs built this arch monument to welcome the empress, Maria Theresa, to the town.  As luck, fate, poor planning or whatever would have it, Maria Theresa’s group traveled down the other (aka “wrong”) side of the river so the empress missed the opportunity to parade through the welcome arch.

And then Sunday morning it was onto the final leg of our journey!