The whole family drove overland to Budapest for that first visit in February 1996 and we stayed for three weeks. A few years later we again drove to Budapest for Szilvia’s wedding, this time with our caravan and we stayed at a great campsite outside Budapest. On that visit, we also travelled down to south Hungary to visit Szilvia’s family.

It goes without saying that this is the first time we have come to Budapest on bikes and it is our first time seeing the western side of the country.

Well it was just as well we took the rest day today. I’d seen the wind symbol on the weather app and boy was this morning windy! Had we been cycling today we would have been cycling right into it. Thankfully it will have died down by tomorrow. Oh, but that’s according to the weather forecast and my faith in forecasts has been a little dented of late. We shall see. We shall hope!

I’ll get this out early. Though Györ is another beautiful medieval city, I won’t test its wifi, nor you, the reader, by uploading lots of pictures. In the spirit of An rud is annamh is iontach, (What’s rare is wonderful) I’ll only mention the rare 🙂

The tourist office had a very good self-directed walking tour of the old city and using it, I saw many of the main sights. Trust me, Györ has some lovely old buildings, its castle, its Cathedral, plenty of monuments … Once again the old part of the city was pedestrianised, with a number of big open plazas. Lovely weather meant lots of people eating outdoors. It did not seem over-touristy. Györ seems to have done a great job of combining new and old. I’ve allowed myself to mention just three Györ sights

Firstly, the Cathedral was undergoing renovation so I couldn’t go in but my notes said – Its northern aisle features the Weeping Madonna painting, which was rescued from Ireland in 1655. On 17th March 1697, St Patrick’s Day, the painting wept blood. I later researched the painting and found an interesting back story here on the Donnycarney church website. Apparently during Cromwellian times, when Catholic bishops were being persecuted and exiled to Europe, a bishop took it with him and on his death he bequeathed it to Györ Cathedral.

I enquired and found that the painting was being stored nearby while restoration is underway. I went and the security guard took me over to see it. He allowed me take a photo without flash.

My second Györ sight is the Benedictine buildings, built by the Jesuits in the 17th century, which line one side of Széchenyi square a lovely open square where we had lunch. 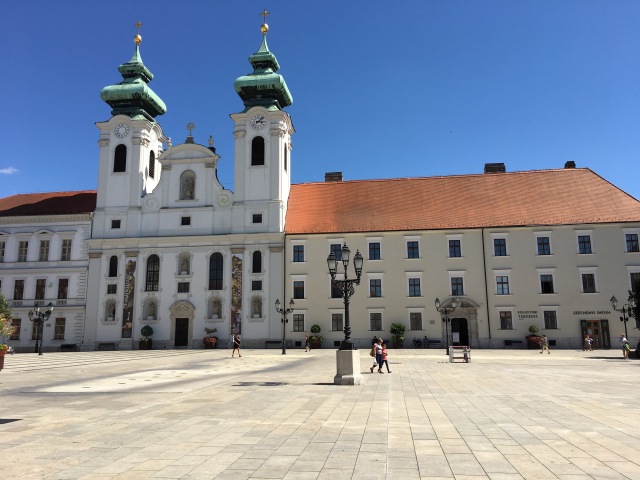 The Church is situated between the school (left of church) and the monastery (on the right). The church is in baroque style.  Within the walls of the monastery is a Pharmacy, also decorated in baroque style, and still a fully-functioning pharmacy! It was the pharmacy that I found fascinating.

The beautiful ceiling of the pharmacy

When no one was there the pharmacist showed me around. The beautiful wooden drawers behind were still in use to store medicines being dispensed. Look at how the drawer sizes decrease, the higher they go on the wall. The drawer mechanism was just so beautifully smooth. 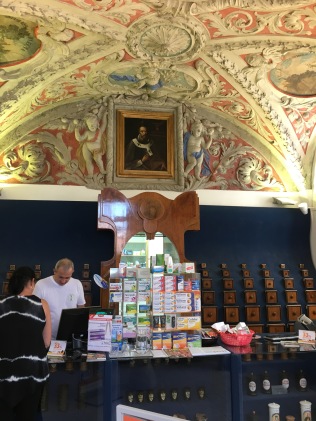 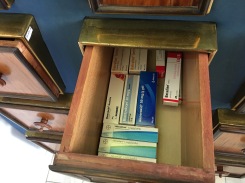 An old water dispenser in the middle of the shop.

Display cabinets for old pharmacy artefacts and a chair in the ‘museum’, a little room beside the pharmacy. The whole thing is a fabulous living museum! 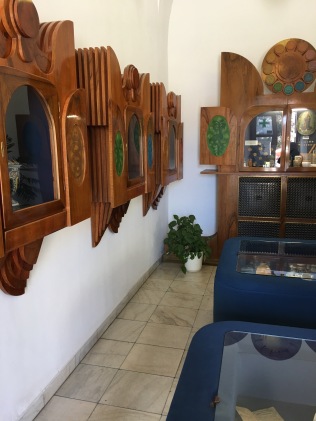 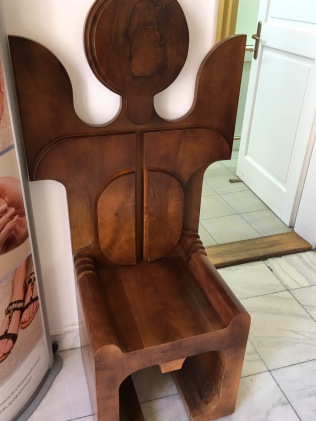 Apparently the silver gastric stapler on the left was a local invention.

My final sight from Györ is this Pulse sculpture which allows one to see the entire city panorama on each side.

Györ has plenty of nice restaurants. We had a lovely dinner both nights in the same restaurant – here are photos of one. Foie gras is very popular in Hungary. The other starter was beautifully flavoured sliced courgette.

Mangalica pork for himself. (The Mangalica is a Hungarian breed of pig.)

And lamb for herself

And lovely ice-creams to finish on our way home.