Days 35 and 36 Saturday and Sunday – Weekend in Vienna

We had a great weekend in Vienna. I’d been to Vienna before but had never spent much time in the city, it was nice to get a chance to see a bit more of it. Vienna is big – 1.8 million live in the city itself.  The city centre was designated a UNESCO World Heritage Site in 2001 and one can see why – it really is so beautiful – there are just so many beautiful buildings – I was wondering to myself how long would you have to stay here to feel you had really seen Vienna…

And a comment on our hotel. Our friends had arrived into Vienna before us so we stayed in the same hotel. Their comment was that it was dinky and it really was. Many hotels have a sameness feel to them but this one had carved out a unique identity and one could feel a difference. The building was a former shopping centre and included many reminders of its former life – the props in the breakfast area were very fitting for a classy tailor!

The hotel included a movie lounge, yoga area, music instruments… A small point that I thought imminently sensible – an ironing station set up on a corridor – no more fighting with that ironing board stuck away in the back of a wardrobe, (not that we are doing much ironing on this trip!) I loved their healthy breakfast, free use of a marker, plants in the dark at reception.

On Saturday we first took a bus tour around the city and then walked between various sights. First up the gothic St Stephen’s Cathedral. 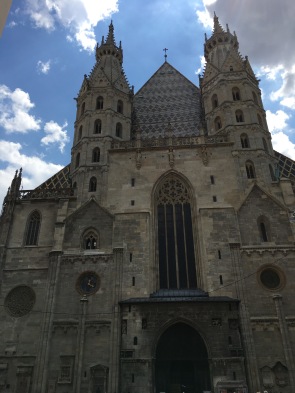 The Museum of history of the Arts 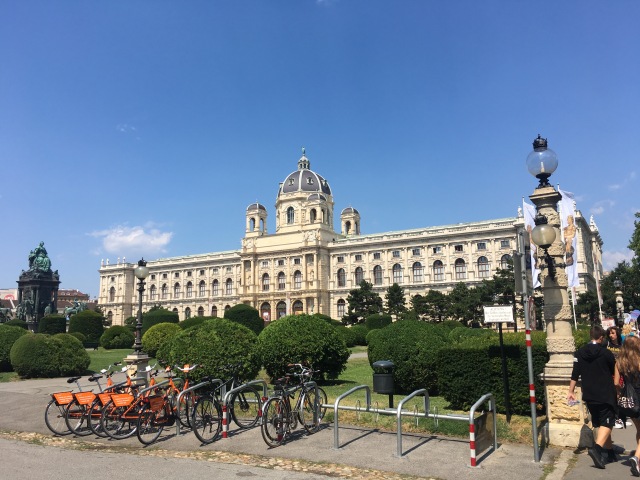 Vienna is well know for its cafés

Fun toilets in a café – when you go in first there’s clear glass on the door and between each cubicle but the glass goes opaque when you lock the cubicle door – but you don’t know that until you go in. Everyone who came in the bathroom area was initially very taken aback – I never saw so much chat going on between people in a bathroom! (The figure in the pictures is just the reflection of the photographer.)

Back to classical buildings! The Vienna State Opera house 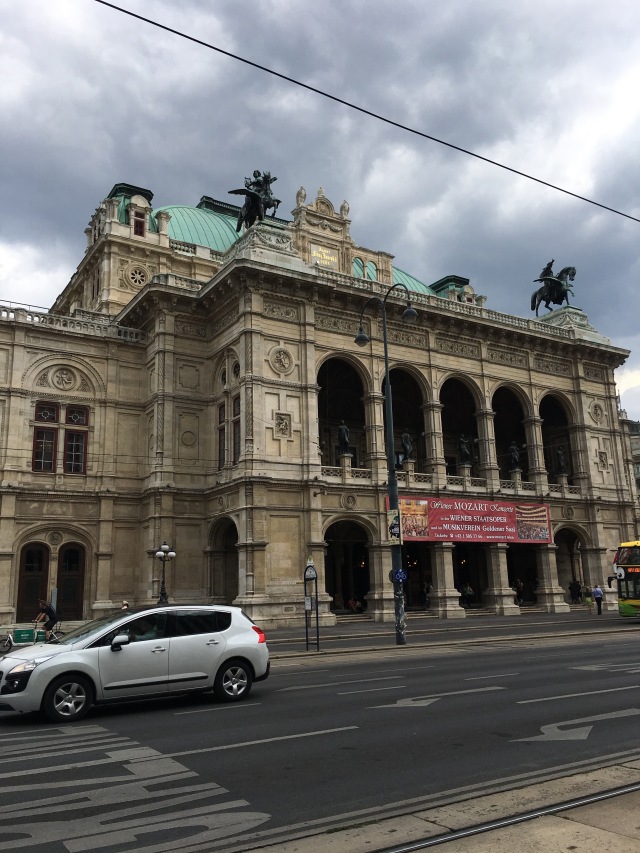 Schmetterlingshaus – Palm house and Butterfly house on the left. We had lunch in Palm house during heavy rain. Unfortunately I didn’t take any good photos of the interior. Again there was thunder and lightning with the rain.

The Hofburg, Vienna’s former Imperial palace  is a big complex of buildings. Once home to the emperors, the medieval castle was enlarged gradually up until 1918, and as the power of the Hapsburgs grew, successive emperors added buildings in contemporary styles. Today the Hofburg houses the offices of the Austrian president, an international convention centre and much more. 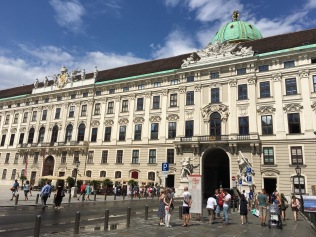 The Theseus Temple is located in Volksgarten Park near the centre and was built between 1819 and 1823. It was intended to be the home for a single work – Canova’s Theseus Slaying the Centaur which, seventy years later, was transferred to one of Vienna’s museums.

Since 2012 exhibitions of single pieces now take place in the temple. This year it’s a work of a Californian sculptor, Kathleen Ryan.

Volksgarten, a park near the centre, beautiful rose gardens with over 3,000 rose bushes of more than 200 different roses.

(Including a photo of another rose!)

Parliament building was designed in Greek style. Two broad ramps are lined by statues of Greek philosophers leading to the main entrance. Here the first republic of Austria was declared in 1918.

My only wish was that there weren’t as many power lines!

I’ve included a few photos of the columnated entrance. I checked up on my Corinthian columns – thanks Ms Hayes for your Latin teaching in secondary school – I did like your classes.

The Athena Fountain (Pallas-Athene-Brunnen) in front of the Parliament building. The female statues represent the legislative and executive powers of the state.

And Joseph with two other female powers.

The republic monument, beside Parliament building, recalls the proclamation of the Republic of Austria on 12th November 1918. The monument consists of busts of the three Social Democrats each resting on a pedestal.

The Liebenberg monument is beside the main building of the university.  Liebenberg was mayor of Vienna from 1680 to 1683. Apparently as early as 1679, he acquired great merit in combating a plaque epidemic in the city and then in 1683, his greatest achievement was during the second Turks invasion of Vienna, he supervised the defence and organised an army.

Andrea and Joseph left early Sunday. I planned my Sunday organising a few things in the morning and then sight seeing in the afternoon. The weather and we are becoming very predictable; we don’t bother checking the weather and it serves up a storm each afternoon. I had set off on my sight seeing but a downpour including thunder and lightning sent me home earlier than planned.

I got to see the magnificent Art Nouveau Secession building. 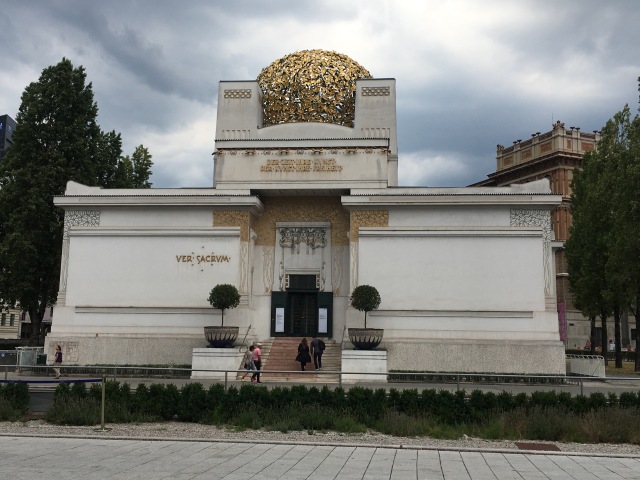 This white, cubic Secession building was built in 1897 and the exhibition hall opened in 1898. Most of the original interior was looted during World War 11. It was renovated in the 1970s. The beautiful dome is made up of gilt laurel leaves. Above the entrance of the pavilion is the motto of the Secessionist movement – in English “To every age its art, to art its freedom”

The mosaic flower pots on either side of the entrance are carried by four turtles.

I had wanted to get to see Hundertwasserhaus apparently an amazing social housing development and Andrea had highly recommended that I go to see the Belvedere, (the latter consisting of two Baroque palaces and much more and is also where Klimt’s The Kiss is exhibited.) Again, I’ll just have to come back!

Our two day break in Vienna was just the R&R we needed after six days cycling. Tomorrow it’s on to Bratislava!